I wanted to share some random thoughts about the game Styx : Master of Shadows on Gog. The review was to be titled Sometimes laborious; still a great title but far exceeded the character limit. This isn’t groundbreaking content, merely a suggestion for Thief enjoyers to try out this game. 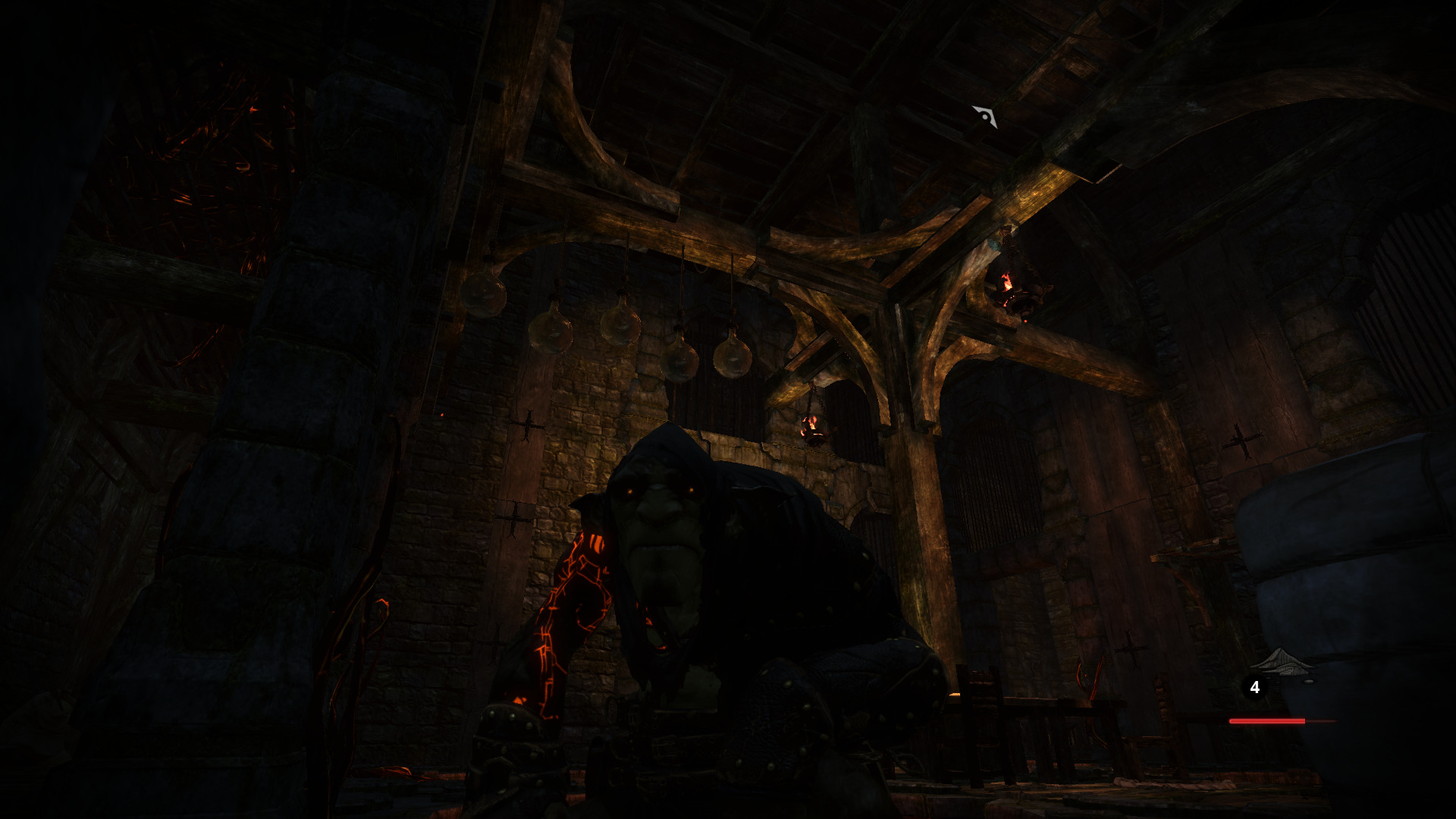 Despite some rough edges and frustrating moments it’s a solid addition to the stealth genre with a memorable setting, simple but refined stealth mechanics and an unusual character whom nature gives room for some fun climbing, sneaking and even cloning abilities. The influences it draws from aren’t obvious to spot. Thief comes to mind first, for the steampunkish medieval setting. The focus on climbing and the character design evokes Dishonored, while the suffocating and sinister underground facilities, as well as the forced cohabitation between humans and non-human races are similarities shared with Arx Fatalis. The macabre scenery witnessed in some part of the game even reminds me of Fable, though that’s unlikely to be a possible influence.

Rather than addressing what has already been covered pretty well in other reviews on Gog or elsewhere, I’ll focus on several specific aspects. Meaning: I can’t structure a review for shit.

The difficulty curve is steep and ramps up pretty quickly to the point of becoming annoying in some sequences, especially for players engaged in finishing the game pacifically, honored by a “mercy” badge for each missions where all lives were spared. Ghosting a The Dark Mod’s fan mission full of twitchy guards feels almost relaxing in comparison to some missions in the later parts of the game. The window to avoid triggering alert is very small and shadows won’t help much. Yet the game is rarely unfair and all situations can be resolved by studying patrol’s pattern and making good use of Styx’s special abilities.

Each mission is pretty open regarding how the player can reach the objectives thanks to numerous conveniently placed cranes, balcony, beams, manholes. Sadly sometime it is needed to get back on the ground and play the classical hide-and-seek game with the guards. Styx can hide in sewer grates, closets, chests or large jars. There is a large amount of suspiciously protruding metallic and stone structures, but those are tropes hardly avoidable for games like this, and each areas manage to feel pretty organic nonetheless.

The level design is very satisfying. The tower, isolated from the rest of the world safe from some airship shuttles, built around a giant tree, is used as a basis for intricate and vertical environments in a medieval setting not unlike the one from the first two Thief. The scale of those areas and the sight they offer is overwhelming, yet the game manages to also pull off some very claustrophobic atmospheres akin to what one can experience in Arx Fatalis. The downside of this “big tower premise” is that there is a lot of backtracking. It strengthens the worldbuilding but getting to cross the same area for the third time, only more crowded, can feel a bit disappointing.

Speaking of worldbuilding, the lack of readables is both a blessing and a curse. Unfolding the game world through notes, letter and personal journal is a common trope used to introduce lore and historical background, but that easily get tiresome when everyone and their dog happen to log everything in a small red book displayed on their nighttable. There’s no novella-sized logbooks to parse in Styx, in fact there’s nothing to read period, which would have been welcomed given that stealing books and written documents is a recurring objective, and how often we set foot inside libraries, private offices and laboratories.

Stealth mechanics are solid overall and don’t drift away from established standards, not too much at least. The AI has keen eyes and will spot Styx in the shadow if actively looking for him, as well as looking under the table or other hiding places to eventually grab the sneaky gob' and whack him in the butt. They also promptly react to unusual noises, including gulping a potion or vomiting a clone right behind them. They’ll relight extinguished torches if needed and keep their weapons drawn if Styx made too much of a racket. The game looks like a platformer from afar but the stealth mechanics are well honed and really core to the game’s experience.

It’s hard to tell if the AI is more reactive than the ones from Thief, Dishonored or The Dark Mod, but maybe it feels less forgiving because of the average number of guards and how quickly they react to stimulus. This is mainly what makes the difficulty very tough and what makes some sequences tedious to play : A bridge with five or more guards patrolling at the same time, with several more standing by the gates means you’ll learn to love the loading and “game over” screens, even when carefully planning each moves. (Some people love this and can spend hours ghosting a single mission with similar settings, I don’t).

Nothing really substantial to add here. Styx is a likable character and they managed not to overdone the sarcastic and humorous traits. Other characters are serviceable at worst. The same could be said for the story, which is perfectly fine. It’s a plot revolving around a valuable and magical substance called amber and the control of what produce it, the aforementionned tree. I didn’t care much for it but felt more involved than some story-driven AAA games. I also spent an outrageous amount of time on the Witcher 3 before getting through Styx, so I was more than done with characters constantly acting like sardonic smartass - and not pulling it off very well. Despite that, Styx’s sharp tongue while bordering on standup comedy didn’t bother me. 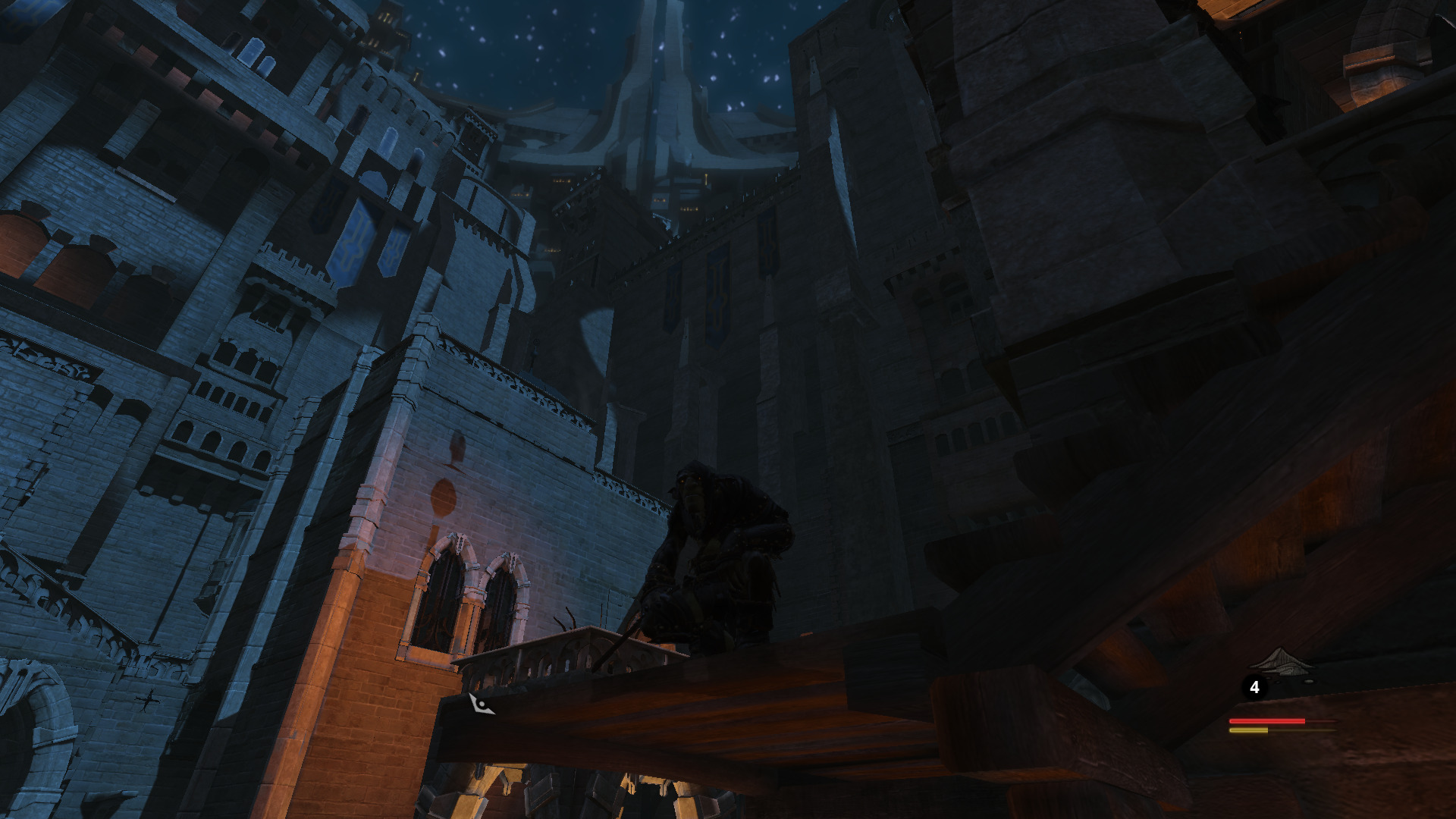 There’s none. It’s a very good title. Thief fans and those who enjoy stealth games ought to try out. Evolving within the confines of this sealed vertical world brings a lot value to it and makes up for the things that are less polished. Verticality is a recurring source of fun in Thief’s and TDM fan missions and is fully exploited in Styx where (I suppose) the game engine’s limits do not get in the way.